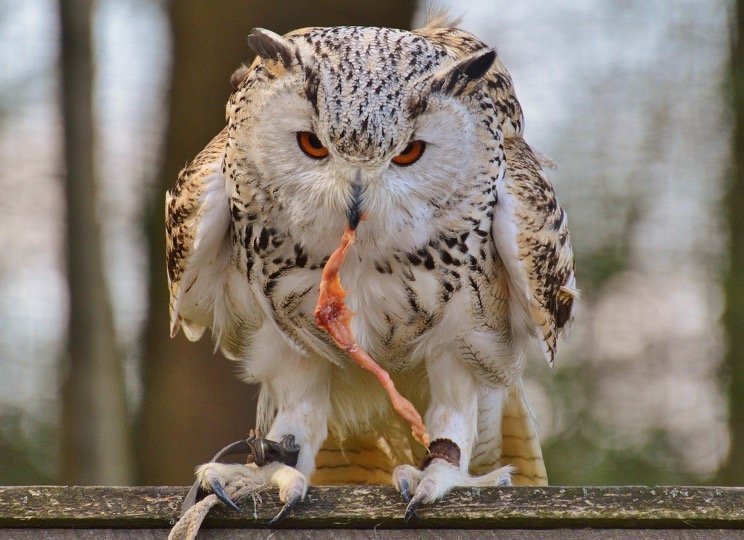 Owls are birds of prey, which implies they primarily consume prey animals. As a result, their diet is virtually entirely comprised of meat. Having said that, owls do eat a wide variety of animals.

There are about 200 different owl species, each with its own food. Some subsist only on bugs, while others spend their days fishing. Most owls are opportunistic eaters, which means they will consume anything smaller than themselves that they can catch.

The vast majority of owls spend the most of their waking hours hunting. They frequently have to attempt several times before they catch something.

What Is Favorite Food of an Owl?

It is dependent on the species. Owls come in a wide range of sizes and shapes. Some species eat only fish. Others are tiny and only eat bugs. Mice are classic owl delicacies, although not all species catch them. However, barn owls primarily consume mice.

Shrews and voles are also regularly eaten, therefore they may be considered favored meals in some cases. Screech owls, on the other hand, primarily consume insects.

Owls have been observed eating fruit on occasion. However, this is uncommon, and owls are still thought to be carnivorous. Fruit is eaten by only a few species, hence it isn’t a common occurrence. 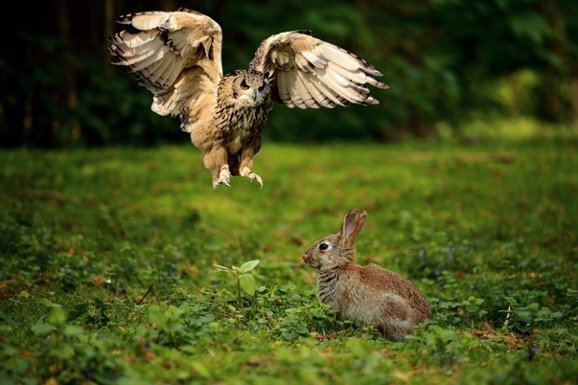 As a result, you should avoid feeding fruit to owls; they would rather eat meat. Fruit is frequently only considered as a food source when prey is scarce. Owls may survive for a while on a modest bit of food, but their bodies are built for meat. As a result, you rarely witness owls eating fruit in the wild.

How Much Food Do Owls Consume in a Day?

The amount of food that an owl consumes each day varies depending on the species. Large owls consume a lot of food, whilst little owls consume less. An adult barn owl, for example, requires up to three voles every day.

Because snowy owls are exposed to food less frequently than other owls, they may be able to consume up to 400 grams of lemmings per day. When food is accessible, they tend to overeat.

How Do Owls Hunt?

Owls eat many different animals, ranging from mice to insects to voles to fish and birds. Because of their keen hearing, owls are equipped with asymmetrical ears that help them find prey in a pitch-black night. 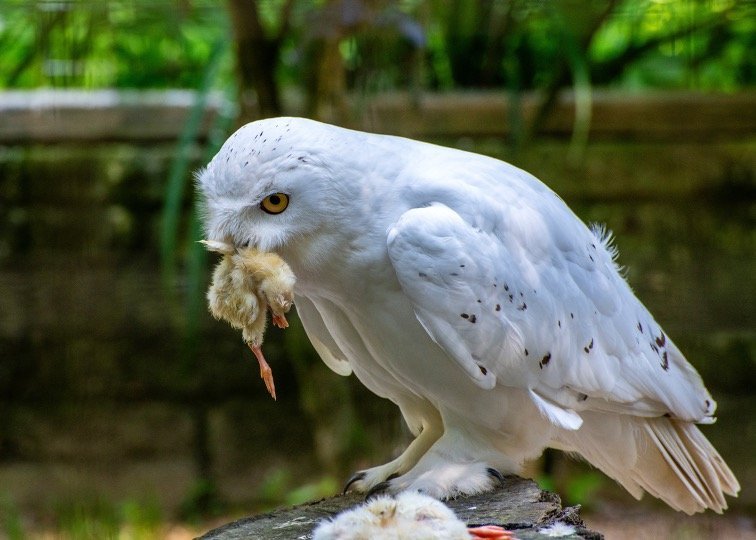 There are more than 200 species of owls. One thing they all have in common is they love hunting at night. With sharp talons, strong wings and a killer sense of hearing, owls are efficient hunters.

Do Owls Prey on Dogs?

Yes. Some pets can be eaten by owls, according to the International Owl Center. Large owls, on the other hand, are usually the only ones to be concerned about. Great horned owls, for example, are frequently large enough to carry off small dogs.

However, owls aren’t very good at catching dogs. Because they aren’t common prey for owls, they don’t get much practice catching them. When their other prey is unavailable, owls will often resort to catching dogs.

Even yet, any pet left outside could end up as an owl’s food. As a result, you should never let tiny pets outside unattended. If your dog weighs less than 5 pounds, he or she may be in danger. Other predators, such as bald eagles and hawks, can also pose major threats.

Do Owls Prey on Squirrels?

Owls will consume almost any tiny animal they can catch, though this depends on the size of the owl. Due to their small stature, many owls will be unable to catch squirrels. 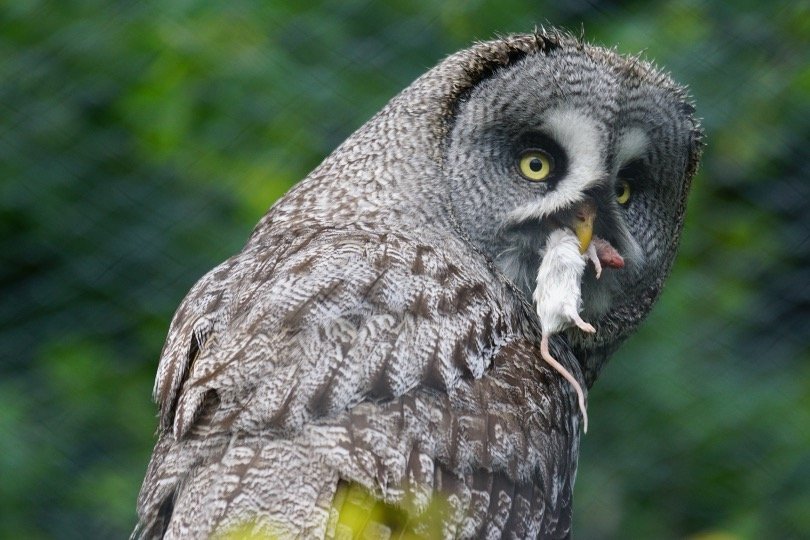 It is considerably more frequent to consume mice and other similar creatures. Many owls primarily consume insects or fish, making squirrels inappropriate for these owls.

Because rabbits are huge prey species, only large owls can eat them. Bunnies are heavier than owls. Although great horned owls may easily consume rabbits, many smaller owls are far too small. 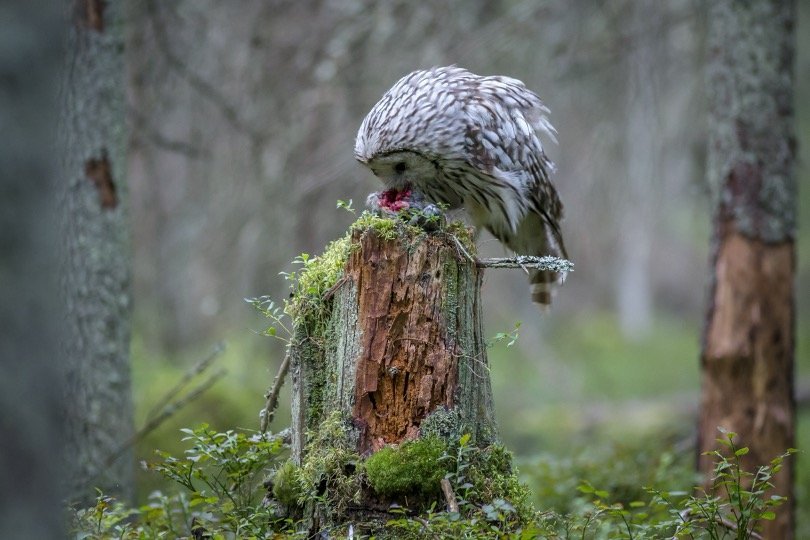 In any event, bunnies aren’t an owl’s principal food source. They are far too large and difficult to capture. Mice and other similar animals, on the other hand, are far more common meals.

The question of whether owls eat cats is a complicated one. They most certainly can and do, but it isn’t really something they choose to do. A person’s cat may be vulnerable to an owl attack, for example, if it goes outside at night when an owl is hunting.

It’s not that owls have any particular hunger for cats; rather, it is just another animal (or bird) in their path or territory that they might feast on if given a chance.

Let’s get one thing out of the way: owls don’t eat chickens. Sure, they can take them if they want to and it might happen on occasion, but do chickens constitute a large part of their diet?

No. So why do so many people say that owls eat chickens? The answer is simple: because when you Google owls and what do owls eat, that is what pops up. 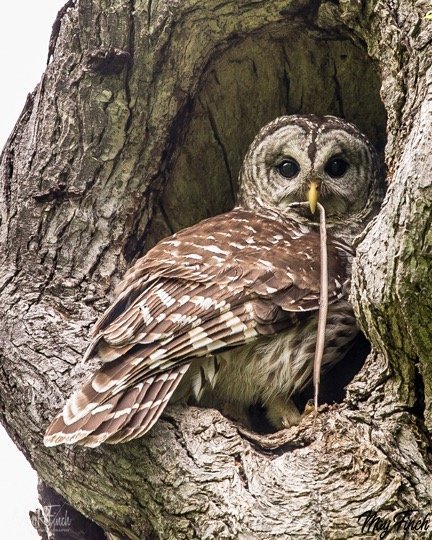 Snakes are one of many kinds of prey for owls. Other types of snake include king snakes, indigo snakes, water snakes and coral snakes. If an owl spots a nest full of snake hatchlings, it will snatch up as many as it can in its feet and fly away to devour them elsewhere.

The advantage for an owl is that snake hatchlings are vulnerable creatures at birth with no means to defend themselves.

Bats are a common prey of owls. All species have been observed preying on bats, but most especially Long-eared, Short-eared and Barn Owls.

It is thought that they catch bats while they are on their nocturnal flight in open country, or by taking advantage of them when roosting in trees and buildings. With wingspans just as wide as an owl’s body, flying foxes and other fruit bats may be caught while still aloft at dusk or dawn.

The frog is one of those animals that an owl will eat. You should be aware of your surroundings if you are in a forest or jungle, and an owl is something to keep an eye out for! 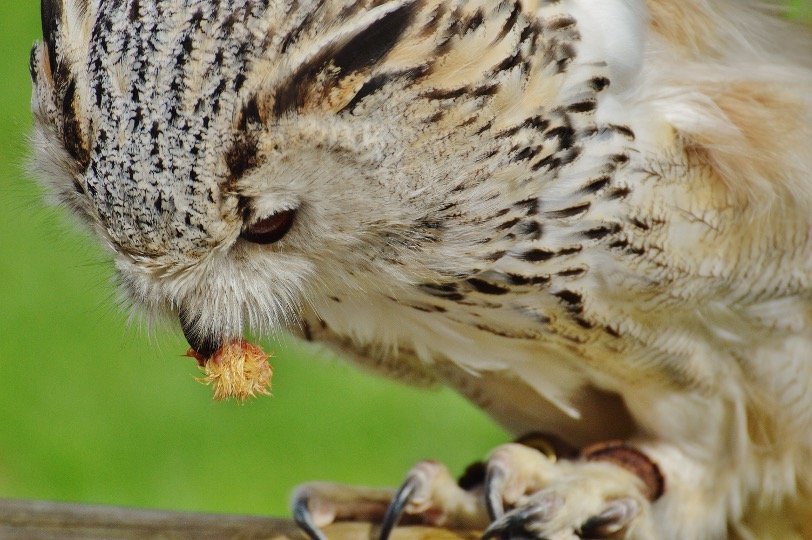 They are carnivores, so they will hunt and eat smaller animals like frogs. Owls may hunt more than just during nighttime, too; some owls are nocturnal and others might hunt during both day and night.

Well, they will eat any bird or mammal they can hunt and catch. So yes, owls have been known to eat dogs but its very rare. But generally speaking, if you see an owl out in a field eating something it’s probably eating a rabbit or groundhog.

On average, an owl can eat 2.5 lizards in one day. While an owl prefers some types of lizards over others, it’s not all that picky when it comes to its dinner. As long as a lizard has decent size and isn’t too poisonous or toxic, it’ll be on top of an owl’s dinner menu for that night. 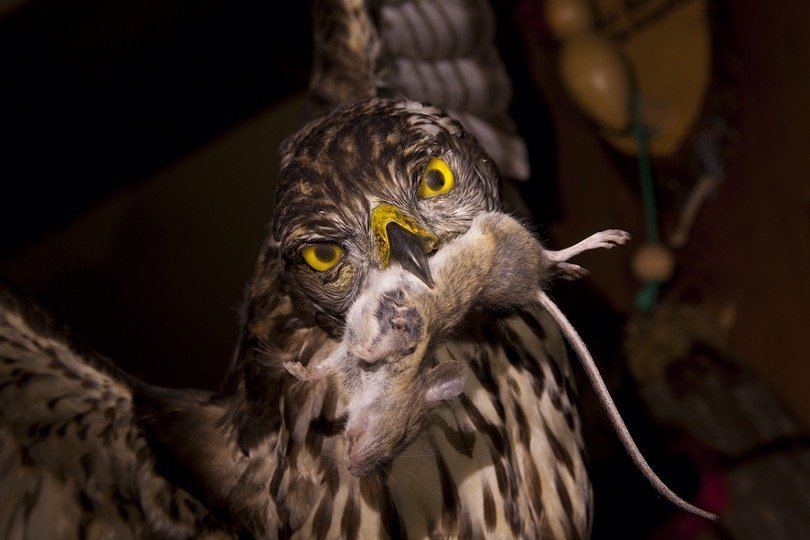 Owls and other fish-eating birds usually hunt by swooping down on their prey from high in the air. Their excellent vision helps them spot a potential meal from great distances. Some owls also like to dine on fish.

Fish are easier for an owl to catch than most land animals, but they’re still dangerous prey—which is why most fish-eating birds including owls have hooked bills or talons that help them get a good grip on slippery fish scales.

The owl is a night hunter, and it’s particularly fond of small rabbits. Owls can pounce on their prey within mere inches of its resting place. Small rabbits are extremely vulnerable at night and an owl swooping down from above presents a deadly surprise.

Owls will eat any reptile they can catch, but they have a particular fondness for lizards and snakes. Owls are particularly vulnerable to snake venom; in fact, owls’ keen sense of smell makes them more susceptible to snakebites than other birds. 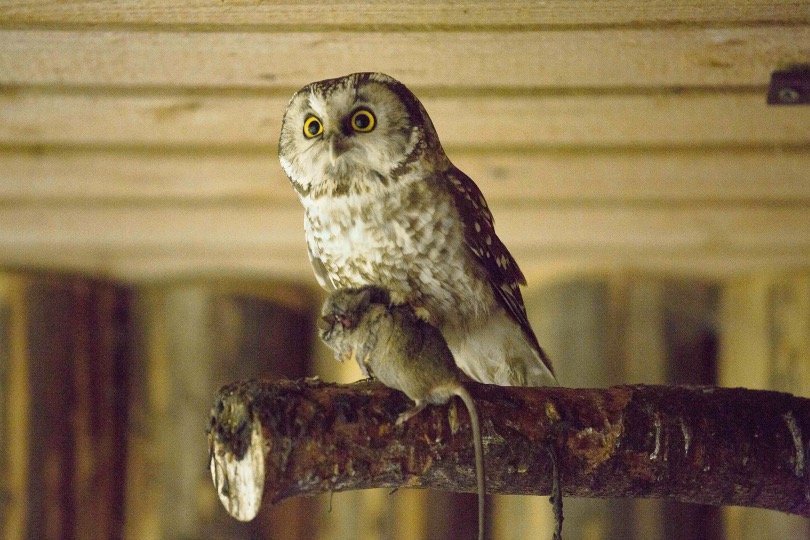 Skunks can be found living in a wide variety of environments, including grasslands, forests, tundra and wetlands. Most of these species are nocturnal—which is why so many people are surprised when they wake up to an owl perched on their porch or walk outside to find a dead skunk on their lawn.

Birds, such as chickens and pigeons, are easy prey for an owl. Once an owl has spotted one of these winged creatures, it will swoop down and attack by going directly at its target—making a series of quick nosedives until it manages to catch hold of its victim in its talons.

It then takes flight to a high perch where it can enjoy itself in peace. Other birds that owls eat include turkeys, ducks, crows and seagulls.

These pesky rodents are notorious for destroying gardens, crops and furniture. They’re also quite tasty when served up with a side of mashed potatoes—as long as you have an owl handy. It’s no secret that owls eat a lot of mammals, including rabbits, mice and even rats. Squirrels, however, can be one of their favorite snacks.

In reality, owls will eat mice in addition to small birds and large insects. Often, they nab these creatures by swooping down and grabbing them while they sleep in their nest or burrow. Owls have particularly sensitive hearing, which means they can pinpoint sleeping prey with ease. 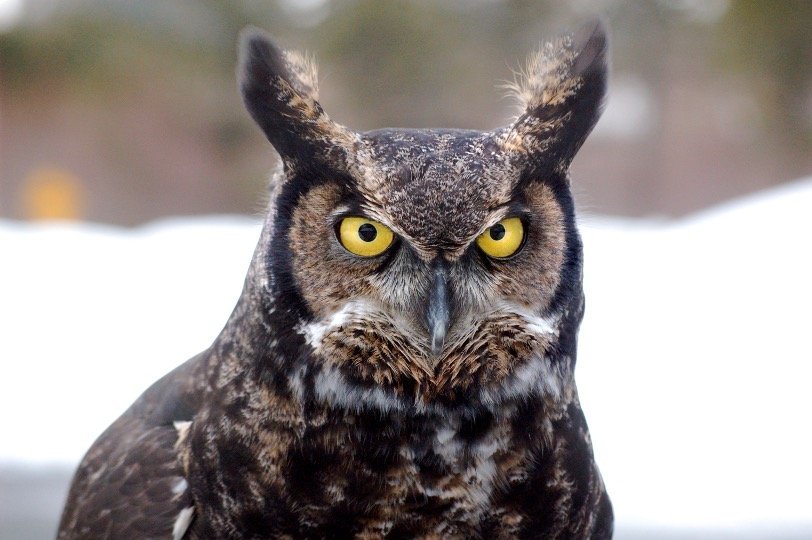 Owls are obligate carnivores for the most part. To put it another way, they solely eat the meat of prey animals. They spend the majority of their waking hours eating or hunting. The creatures that these birds consume will vary depending on their species.

Most owls specialize in one sort of food, however some are more opportunistic than others. Certain species fish or predominantly consume insects, while the majority simply eat whatever they can get their beaks on.

Small dogs, as well as fruit, are sometimes prey for these birds. However, this is uncommon and usually occurs when other prey items have become scarce.

Spread the love
Tags: What Do Owls Eat?